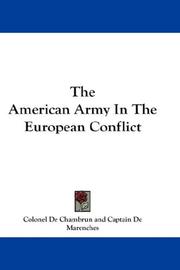 The American Army In The European Conflict

The European Theater of Operations, United States Army (ETOUSA) was a Theater of Operations responsible for directing United States Army operations throughout the European theatre of World War II, from to It commanded Army Ground Forces (AGF), United States Army Air Forces (USAAF), and Army Service Forces (ASF) operations north of Italy and the Mediterranean : United States Army. Fought between and , the American Revolutionary War, otherwise known as the American War of Independence was primarily a conflict between the British Empire and some of its American colonists, who triumphed and created a new nation: the United States of America. France played a vital role in aiding the colonists, but accrued great debt in doing so, partly causing the French Revolution. 17 rows  In all, 44 World War II campaigns were designated by the U.S. Army: 24 for the Asiatic – . Book/Printed Material The American army in the European conflict, Also available in digital form. Contributor: Chambrun, Jacques Aldebert De Pineton - Marenches, Charles Date: ; Book/Printed Material Demobilization; our industrial and military demobilization after the armistice,

American Airlines has airline tickets, cheap flights, vacation packages and American Airlines AAdvantage bonus mile offers at   Moreover, the book demonstrates how the Army and nation met the challenges of mobilizing for a large-scale WORLD WAR IAfter the . American Military History intends to provide the United States Army—in particular, its young officers, NCOs, and cadets—with a comprehensive but brief account of its Center of Military History first published the book in as a textbook for senior ROTC courses. It has gone through a number of updates and revisions since then, but the primary intent has remained the same.   The American military followed European practice right up to –the Europeans already knew what the American military knew. Mahan taught fortifications for years before the war. If the army had the West, then the French had Algeria (the home of the zouaves) and the Brits India.